You might have noticed we have a new logo! October will mark Sarah Sofia Productions 4th year as wedding and event planning firm and as we grow and expand so does our band.

It all started with my love of coral and blue and designing my business cards with those colors and motif.  I wanted something that would coordinate across the board from my website, to my blog, to my social media outlets.

That’s where Madison Wetherill, Grace & Vine Studios, came into the picture and made our new brand a reality. Madison did an amazing job capturing what I had envisioned and working with me to get it just right.  You can read all about the details and the process on her blog here.

If you haven’t stop by our website lately, come on by and check out our new logo here.

Since Monday is the official first day of fall we are sharing some festive fall décor with you today.

The colors red, orange and brown usually come to mind when I think of fall décor.  However, don’t be afraid to mix it up with blue and green or even some pink and purple.  You can still be classic and elegant with being different!

Use décor items that you already have but in a new way to showcases your fall tablescape. Such as this turquoise table runner over a burlap table runner.  Adding new décor items to your tablescape doesn’t have to break the budget. For example, these colorful branches of leaves we a great find at my local grocery store for under $10. Wondering what to do with all those apples you just picked? I used mine as centerpiece here.

I love mixing high and low items such as my Villeroy & Boch china with Pottery Barn blue plates and my Target linen napkins.  The combination really makes the colors pop.

While I am all about pumpkins, try using another vegetable like squash, which makes your tablescape unique and adds dimension with the various colors.

Another easy décor item is switching out your candles.  I love how these gold and white striped candles look against the array of colors.  These candles were a hostess gift from my friend and fellow blogger Summer, Simply Stylings and they add just the right touch to this tablescape.

I’m thrilled to be guest posting for Katie, at MomFavorites.com, and today I’m giving you a teaser of my Fall Family Fun article. As a wedding and event planner and stylist I usually blog about my events, entertaining and décor tips. However, this post allows me to step out of my normal comfort blogging zone and share my personal life with y’all!

The beginning of a new school year has become the unofficial welcome of fall for many of us. The smells of pumpkin, cinnamon, apples, and spice fill the air and we welcome the crisp mornings and chilly nights.

Charlotte offers a variety of fall fun from apple picking, to pumpkin picking, to hay rides and animal petting farms, to hiking trails.

Our first stop is always the Yiasou Greek Festival, which is the first weekend in September located in Dilworth at Holy Trinity Greek Orthodox Church.  The Greek Festival is rated the best festival in Charlotte, and we agree!  We’ve been going for a few years now as a family and have figured out Sunday is the best day to go for several reasons: It’s as crowded and usually you can find someone handing out free tickets. The kids love riding on the rides and the food is too delicious to pass up! The outdoor vendors are our favorite, especially the spanakopita and lamb gyro!

As a native Ohioan living in Charlotte I miss the apple picking days of my childhood. However, just outside of Charlotte there is one apple picking farm that is perfect for a Saturday morning activity with the family.

Carrigan Farms, just outside of Charlotte in Mooresville, is the best place in the area to go apple picking. After apple picking we enjoyed the delicious apple cider and watching the bees make honey.  You can also pay a small fee for a hayride tour of the farm. However, unlike other areas in the country, apple picking season in the Charlotte area is very short, August 31-End of September.

For more Fall Family Fun check back here on October 10 or hop on over to MomFavorites.com for my full article, including pumpkin patch round up!

As an event planner, I am excited about this latest corporate event I’m working on and my partnership with Connected Strategy Group, Amanda Marko.

Storytelling for leaders is a one day course coming to Charlotte, NC on October 2, 2014.  You will learn to utilize tools that more than 200,000 organizations worldwide, 85% of the Fortune 500, to engage your audience, and impact customers.  These tools foster team collaboration, empower employees, drive business agility and promotes organizational connectedness.

Leaders from companies undergoing change, deploying new strategies, transitioning management teams, engaging in merger and acquisition activities, and transforming their cultures have all benefitted from (and thoroughly enjoyed) Storytelling for Leaders. In fact, the Net Promoter Score for the program is 65 – that puts it on par in terms of customer loyalty with companies like Zappos, Amazon, and Harley-Davidson.

The program was developed by the world’s foremost business storytelling experts, Australia-based Anecdote. And my friend Amanda Marko is the first person in the U.S. to partner with them to bring the interactive workshop which has already been delivered to global companies like IBM, Shell, SAP, and InterContinental Hotels Group, to more American companies.

Storytelling for Leaders is being offered in Las Vegas, Charlotte, New York, Boston, and Washington, D.C. and registration is now open.

To learn more and register for this course in Charlotte please click here.

For additional information about the full program please click here.

Feel free to contact me directly with any questions or concerns at sarah@sarahsofiaproductions.com

My Sofia the First started getting into Sofia the First Disney Princess right after her second birthday.  We have the book, her princess gowns and accessories, the movies and shows.  It was only fitting that I start planning her 3rd birthday after her new favorite character!

Instead of your traditional princess party, I made it into a princess and prince party, which allowed us to include all of Sofia’s close friends.

Below is the set up outside for Sofia’s Royal Guests! We set the table with Sofia The First dinnerware and fine linen and added a castle tent that resembled an outdoor scene in Sofia The First.  While the main color is purple in Sofia the First’s gown, my Sofia the First loves the color pink and I wanted to incorporate that in the event design.

We also had a colorful bounce house castle that kept Sofia’s royal guests bouncing with joy through the party!

It wouldn’t be a royal celebration without princess tiaras and prince crowns! We set up a arts and craft table on the deck for the kids to decorate their favorite princess tiara, prince crown, sword or shield.

In keeping with the pink and purple theme,  I wanted the buffet table to be whimsical and not too fancy or grown up.

A delicate light rose floral arrangement on top of a gold and crystal stand served as our centerpiece flanked by fairy wand arrangements.  I had started to make topiary arrangements, but the fairy wand felt more whimsical and kept with our princess theme.  Purple tulle with sparkles was used for the tutu effect on the edge of the table and pink tulle draped over the white linen.

Other décor items came from Sofia’s toy collection with Sofia The First figurine dolls, Sofia the first accessories like the princess shoes pair of gloves, and magic wand. I found the festive fairy wands at Target months ago and used them as part of the display and party favors for Sofia’s royal guests.

You can’t have enough pink! Pink garland was hung above the main food buffet and outside on the deck.

Pink pom poms were hung over the drink and appetizer station.

From the looks of things the Fairy Tale Cupcakes were by far the favorite item!

It was a fun party to plan and even more fun being a part of the celebration! 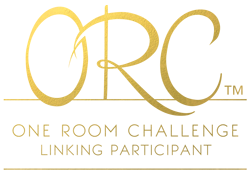